Your pieces are your only resources.

pieces is a GM-less tabletop game for 3+ players that involves cutting up and taping back together paper dolls.  Requires paper, drawing utensils, scissors, tape, a 4-sided die, a deck of 52 cards (jokers removed), and a bag.

Interpret cards to create situations, vote on solutions, and sacrifice pieces of your body to solve problems. Cooperate with the other players to build a story as you destroy your original body and build yourself a new one.

Inspired by body horror media like Society (1989), The Thing (1982), Junji Ito's work, The Magnus Archives podcast, and Upgrade (2018), among others. This game focuses on themes of sacrifice, control over your own body, and what makes you human.

In order to download this game you must purchase it at or above the minimum price of $3 USD. You will get access to the following files:

Support this game at or above a special price point to receive something exclusive.

If you are unable to buy pieces, take one of these community copies!

Every $3 spent on pieces adds one copy to the community pool.

Pieces is a 9 page trpg that hits hard with minimalist helplessness-horror (or alternately posthuman body-horror.)

Its influences stretch from The Thing and Dead Space to Human Centipede and Saw, and while everything in the PDF looks pretty innocuous (making the horror hit quite a bit harder,) you may want safety tools on deck, even after explaining the premise.

Pieces is setting-agnostic for the most part, which feels like a narrowly missed opportunity. There are movies and other media listed as influences that you can copy from, but a strong, well-communicated setting does a lot to anchor a scenario, and this feels like it would benefit from that. At minimum, a setting communicates what's in-bounds for the horror, and this helps players make an initial estimate about whether they're going to be okay with the content, so the GM may want to decide on a setting before they pitch playing the system.

Pieces' mechanics are exceptional, though, and they really lean into the flavor of the game. Gameplay consists of a series of situations prompted by a deck of cards, with the players deciding individually whether to intervene, and then the group voting on which of the intervening players lose a limb as a result. Anyone who didn't intervene can recover the lost limbs and take them for themselves, potentially going beyond their max starting limbs and becoming some kind of unchecked limbbeast. This sort of torpedoes some setting concepts, and it may be perfectly viable to play without limb recovery at all.

Also, if no one intervenes, everyone loses a limb.

The game's mechanics do revolve a bit around having physical props (paper dolls, as well as d4s, scissors, the playing cards, and a bag), but alternate rules are given for playing remotely or without props.

Overall, if you like strong, concept-driven short horror games, Pieces goes toe-to-toe with just about any I can think of. Do have safety mechanics ready, and probably do thresh out a scenario in advance, but if you want a grisly one-shot with a genuine feeling of loss to its mechanics, this is that. Buy it.

Hey- just wanted to say that I played this with my friends, and we loved it! Played very well and we had no trouble playing for about three hours. Ended up with two mostly humanoid people with odd parts, and one abomination with three torsos and an extenda-leg.

Thanks so much! I'm glad you enjoyed ~

this is right up my alley, let's hope I can find someone to play with me :P 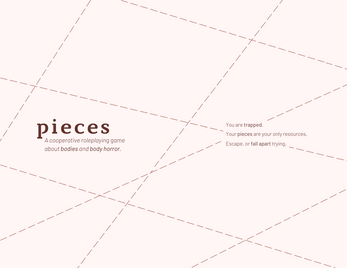 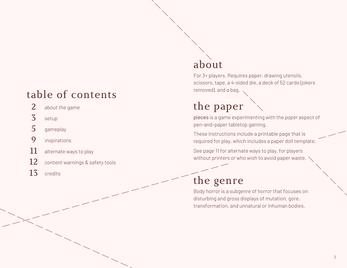 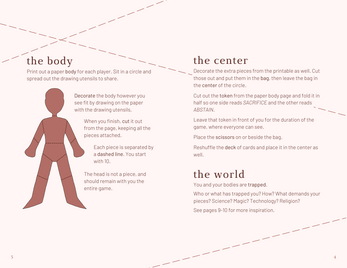 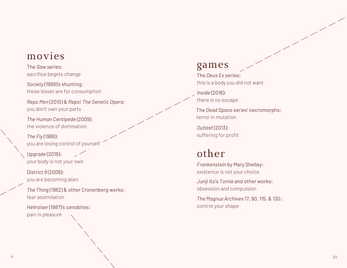